Where are the country people gone?
where are the sundark faces now?
the love, that kept the quiet heart?
the strength, that held the heavy plough?
Grasslands and lowing herds are good
but better: human flesh and blood.

There is a difference between a landscape that has always been nature, and a landscape that was once lived in and been worked on by people. People that on  a certain moment in time have left, and left their home and land behind them. “Wasteland”.

Ireland, and specially its west coast are full of such wastelands.

Occupied and lived upon and now steadily, after years and years, lovingly embraced by Mother Earth. Covered in a green cloak of trees, plants and shrubs. Centuries after centuries the Irish, preferably, did not live in towns or villages, but as families in small settlements on “good spots” in harmony with nature. Always near a well or floating water. The ancient remains of these “clachans” are still visible everywhere through the Irish landscape.The abundance of space makes clearing out unnecessary.

Such a place, where the ancient powers of Mother Earth slowly but surely have taken over the abandoned en sensible remains of human habitation, is Annagh More. A towmland in Glenflesk near Killarney in County Kerry. An abandoned clachan, a few derelict sheds and cottages halfway on the slope of the western Pap of Anu. A long and winding driveway up is slowly getting greener and less passable. Once up the silence is overwhelming and intense. Long gone human energetic remains are tangible around the trees, murmur in the shrubs and are visible in the remains of once carefully stacked walls and collapsed roofs. The elder tree grows proudly from a still surviving chimney. A weather beaten timber front door has become inaccessible behind a exuberantly growing hedge of fuchsia and ivy. Peeping through a gaping window hole: an abandoned chair and table, a cupboard, bold but not yet embraced by ivy and brambles. Nature has worked hard sinds humans left the place: giant firs seem to touch the clouds. Ash and hawthorn have free play. Ivy and bramble crawl lavish over the field. You can hear birds whistle all around.

A skylark points to the way down, slightly below the settlement. There a bigger house is situated. Two floors, simple robust and pure. From above, seen between the trees and bushes, apparently as abandoned as the rest. But the roof is still intact. Looking closer, two sets of French doors offer an miraculously different impression than the well known small sash windows. Something is going on here. Human hands are once again at work in Annagh More. At the side of the house there is a new extension with a sloping slate roof. Holes in the walls point to locations where doors and windows are planned. A floor of isolated board is patiently waiting for ist finish. On the inside the house is barren. Carefully stripped of layers of gone human lives. Here the silence feels gay and full of expectations. Some chairs, a kitchen table and a cupboard filled with new hardware, boots, a bag and a lunch box. The house is once again touched by human hands. The old fireplace is opened up and anxiously waiting to be lit. The house is watched again by people. Their eyes peek through the situation and imagine their dream come to existence. Eyes see the outside through the windows and see the beauty of the land: through the trees, near and far, the endless green hills. Down the valley, on the Cork to Killarney road, just hearable, moves the modern life. Around the house space grows again. Space of life. Green can give way again because people are returning to Annagh More. And Annagh More rejoices in their return.

And between the shrubs the Green Mother whispers:

“Be careful, humans, with your words,
be careful with your thoughts,
be thoughtful of your hand and feet.
Be humble with your deed.
For strong and holy is this place.
T’is Mother earth watched over her
for many many silent years
to show you how to live in peace
and sacred harmony.
Cherish this holy place
this ground of Annaghmore.
Awaken her most tenderly,
and she’ll revive in joy.”

(Abel Drent, Sunday July 10th, 2016 on the bus to Donegal)
Translated from Dutch by Jan Tetteroo

Mountain Retreat and Rural B&B in the Killarney area

We care for you and your family. Strict hygiene and social distancing.

The best hikes in Kerry: Mangerton, Carrauntoohil and many more. Guides available.

If you want  more information, send an email to: info@annagh-more.ie or check for available rooms here:

From dawn till dusk you will notice the birds on Annagh More, just by hearing them.. This surely is a paradise for bird lovers. The regular garden birds live in great numbers around the house. Just look out of the kitchen window and you will see them on their feeding table. Read More….

Visit 3 of the best-known towns in Co. Cork: Blarney, Cork and Cobh. Visit the Blarney Castle, explore its gardens, and kiss the Blarney stone. Visit the English Market in Cork. Admire the beauty of Cobh, and learn about this last departure point of the Titanic. Read More…

Near Killarney on the road to Tralee, you find this two Ringforts. It is a beautiful place for meditation. Feel the earth energy flow in your body, and heal your subtile energy system. 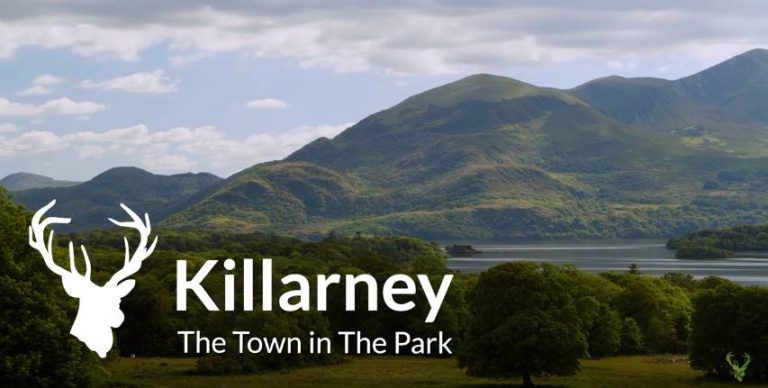 Killarney video – The Town in The Park

On the N22 from Cork to Killarney at about 12 km for Killarney take the exit to the right marked L7059.

On the N22 towards Cork coming from Killarney at about 12 km take the exit to the left marked L7059.

After the exit follow the road for about 1 mile or 1.6 km up the hill. After about 1.2 km you have to open the left gate. Please close it immediately after passing for the safety of the horses.